Older adults in their 70s who maintain their physical ability to accomplish everyday activities like walking, standing up from a chair, bathing, and dressing may have a lower risk of dying than those with declining physical function, according to an NIA-supported study. The findings, which were published recently in the British Medical Journal, suggest that middle-aged adults in their 50s and 60s may be able to reduce their risk of dying in early older adulthood by working to maintain their physical function. 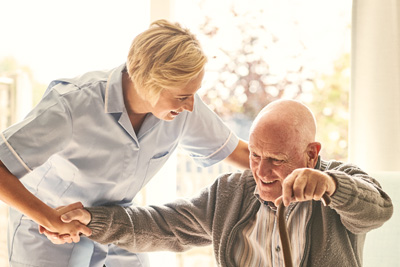 In previous studies, researchers observed that there may be a link between physical function decline in older adulthood and increased risk of death. For this study, researchers at the University of Paris, INSERM, and the University College London examined physical function over many years among nearly 6,200 research participants enrolled in Whitehall II, a long-term study of British civil servants supported in part by NIA. The research team evaluated physical function through objective measures of walking speed, hand grip strength, and ability to stand up from sitting on a chair. All participants were also asked to describe their ability to perform everyday tasks such as bathing and cooking.

The research team analyzed all deaths from any reason that occurred by October 2019. Between the first measure in 2007−2009 and October 2019, 654 participants died at an average age of about 77. Those who died tended to have worse physical function measures, especially slower walking speed, than those who were still alive in October 2019.

For the next analysis, the team examined the trajectories of the decline in physical function over 10 years before death. To compare adults who died to those who survived, the team only considered deaths that occurred by the end of the follow-up visits in December 2017. Between 2007−2009 and the end of follow-up, 484 participants died. Survivors tended to have a faster walking speed, stronger grip, and better ability to stand up from a chair, and these differences between survivors and those who died could be detected several years before death. In addition, during the years before death, the rate of physical decline increased. These findings suggest that early detection and correction of declining physical function in middle age may help lower the risk of death in early older adulthood.

A limitation of the study was that death from any cause was considered, and the authors acknowledge that terminal decline of physical function may vary by cause of death. However, the Whitehall II study continues, and as the surviving participants continue to grow older, additional research can be conducted and analyzed.